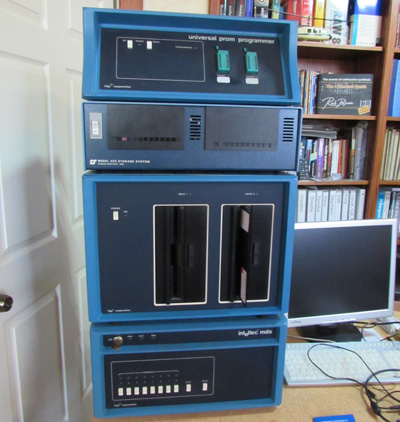 Click images for larger view
I worked on MDS systems in the 70s and purchased one on ebay. The system came from a company in Ridgecrest California named Hill Electronics.

My goal is to bring this system back to life, preserve it, and do some documenting to help others.

Thanks to all retro-computerists out there who are providing assistances and resources.

Technically my system is an MDS888 but it appears to just be the same as an MDS800.

From 1977-1980 I worked with Intel MDS800 development system computers at Noakes Data Communications in Irving Texas. I was 16. We used them to design an 8080-based industrial computer which we manufactured for Shell Oil and some other companies. We had the 8080 In-circuit-emulators and the PROM programmer also. On my own time, I used the MDS800 to write a CP/M BIOS for our proprietary 8080 system which booted from 8" floppy drives.

In the mid-80s, the company went out of business and there was an auction which I attended. There sat 2 MDS800 systems with dual floppy drives, prom programmer and the ICE-80 modules. I bid against another guy and he eventually won. Later he came up to me and said "Hey, I just want the rack frames they're in, I'll sell you the computers". So I bought them, and we developed a good friendship. He was an airline pilot living in Hurst TX.

Life was hectic then with a family and small business and I never had the time to bring the systems back to life. Ultimately I sold or gave them away to a computer company in Louisiana. Later I was told they were put in a dumpster. :(

So, I'm very happy to get this machine and make it whole.

◼ Host board for Hard Disk 003-00003 Rev 4 from Data Technology Corp Picture in slot #5
This board connects to an external HD cabinet, see below.

◼ Custom wire-wrapped board with 8251 UART and serial port connector going to on back panel, in slot #11
Obviously just an additional serial port, possibly for high-speed communication with an external PC and moving programs.

◼ ICE-49 pod with boards and manuals

◼ Software - a single 8" ssdd diskette and some on the hard disk. I'm still working through this.

◼ Very first thing, lose screws. I turned this very heavy system in all different angles to fish out the screws floating around. Just one could totally destroy a system. One was from the front panel and one to the back panel.

◼ The system would not go into RUN mode, and produced no serial output. Traced the problem down to a bad 7474 on the Monitor board keeping the baud rate clock from going to the UARTs. Replaced it with a 74LS74. Now it boots and I can get into Monitor V2.0!!!

◼ The floppy drive box had a blown 3 amp slow-blow fuse.

◼ I noticed the filter cap for the 5v rail in the floppy drive box was oozing. A scope showed no ripple on the line but I replaced it anyway.

◼ The system didn't have a floppy drive cable. After looking at the drawing and seeing all the twisted pairs and 50-pin connectors, I figured out a phone PBX cable was pretty close, having the cabling I need and one of the connectors. Rewired the cable and soldered on a DC37 male which goes to the MDS888 back panel then to the floppy controller board. The system will now sometimes boot the diskette left in the system. Picture Pinout Large

◼ Did some research on the paint color of the MDS888 and figured out it was almost exactly the same as Sherwin Williams Polane-T Nitro Blue. This just happened to be the same blue that I had my paint vendor use on a product in the 90s. Got a few oz from him along with catalyst and did some touch up work. Perfect match.

◼ The foam on all of the air inlets was crumbling and making a mess. I finally found a replacement at Lowes. It's a filter used in window AC Units.

After seeing the internal Host controller and browsing the seller's other auctions, I concluded that the external hard drive system from Radio Switch probably went with this machine and bought it. Took my chances and it paid off. It does indeed go with the system and boots. See the Operation section for details.

◼ After the repairs, the system boots into MDS Monitor V2.0 !!!! It's very exciting to get this far. So much has to work at this point. I'd almost be happy with just this, but there is so much more that can be done.

◼ Sometimes the floppy diskette will boot into OSIRIS V 3.00. A DIR looks like this. What is OSIRIS?? My guess is a customized version of ISIS or something for use with the external hard disk.

◼ Sometimes it won't boot and just gives an Error 24 with a Status 11 or Status 13. The ISIS book tells me this is a disk error. The book doesn't make clear what the status # means. I fear this means the Hard Disk is going bad. There is no ripple on the HD +5, +12 power supply. Once it gave me a "bad executive checksum" so I suppose that's either the HD or possibly memory.

Investigations by Jack M. suggests OSIRIS might be a short-lived version of ISIS designed for the last version of the MDS888 before the MDS225 development systems were introduced. Jack asked to see the contents of the ISIS.DES file, here it is copied to screen, it's binary, so many unprintable characters but there is some ASCII clues in there. My first attempt at using the putty terminal emulator to capture the file as a session failed but I'll work on that.

Jack offers this potentially relevant history:
The Egyptian Myth of Creation. From Geb, the sky god, and Nut, the earth goddess came four children: Osiris, Isis, Set and Nepthys. Osiris was the oldest and so became king of Egypt, and he married his sister Isis.

Jack suggests this is an important part of Intel history and I agree. My goal is to archive all of these files once I get the hardware going correctly. 'First do no harm' is my motto. Currently I'm not able to format and write a new floppy disk and definitely don't want to write on the HD. I've ordered an ST225 HD also for future backup but most of the HD can fit on a stack of floppies if I can get that going.


Intel PIII515 and other stuff

Very first project is to save the data on this floppy disk and hard disk. I know some of the hard disk is bad. There is likely a simpler way but first I tried the brute force method and used RealTerm with 8N1 parameters at 2400 baud to copy the DIR program to the console and capture it. The command is:

The captured file had an extra CR/LF at the beginning and 25 bytes of "COPIED :F0:DIR TO :CO:" CR LF "-" on the end which I deleted using this Hex Editor. Here is the binary of the DIR file (5747 bytes). Don't let the .txt extension confuse. So, it's a humble start. We'll see if anyone can load and run it.

I'm looking for a Single-Density floppy controller board set so I can read old disks I have including CP/M. The Intel SBC201 single-density board set is Channel board PWA 1000467 and Interface board PWA 1000603.

Also interested in another dual disk drive box - with or without drives.

The Zendex ZX-200A Floppy Controller board claims to emulate both SBC201 and SBC202 floppy systems so that's an option, as well as the ZX-208 which I've heard can also emulate them.

And the National Semiconductor BLC-8201 board is also said to be an SB201 replacement.

I'd also like to have an MDS-CRT since this system probably had one initially, and

Original printed documentation or diskettes for the MDS Development systems.

Let me know if you run across these for sale or can offer any help.