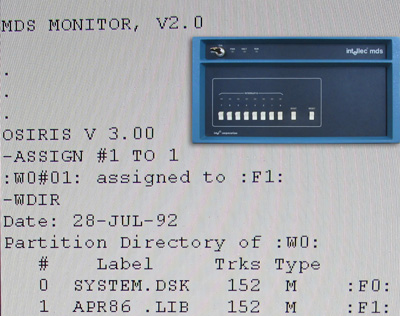 Click images for larger view
The standard operating system in the late 70's for Intel Intellec MDS800 or MDS888 Development System computers was ISIS and ISIS-II. Same for some future models including Series-II.

But this system is different. It's called OSIRIS V3.0 and was possibly an interim version or maybe a customized version for use with a hard disk, by Intel or a 3rd party.

This page serves as an archive to preserve this software and to explore with other vintage computer enthusiasts.

One 8" SSDD floppy disk came with my system and it is labelled OSIMAN.300 System Mgr Disk.

Here are the floppy files in a zip.

At bootup, the START.CMD submit/batch file runs and assigns the drives then displays a WDIR showing the partitions.

Here is a WDIR listing as a text file.

After bootup and the automatic assign's, :F0: is the first partition on the hard disk named SYSTEM.DSK.

Here are the SYSTEM.DSK files in a zip, excluding anything that looked like a user file.

Capturing these files was done using a custom VB program I wrote called MDS Talk. It runs on a standard Windows PC using a standard RS-232 serial port. MDS Talk communicates to the MDS888 via its CRT port at 2400 baud (N81). The cable is 3 wires only - RXD,TXD,GND. No handshake is involved. The files are sent using the COPY command to :CO:. The allowed me to transfer the files without writing to any of the media in the MDS888.

With MDS Talk, I can boot the system providing a Space Bar, send commands such as DIR and ASSIGN, and transfer files. Data integrity is accomplished by transferring each file 3 times then comparing, along with matching file sizes to the DIR listing.

Here is a screen shot of MDS Talk

Initially I transferred some of the files manually just to see if it was possible and it is. I communicated with the MDS888's CRT port at 2400 baud with a Windows PC running RealTerm. With it I could issue commands like
COPY :F0:FILE.NAM TO :CO: and capture the results which appeared as non-ASCII garbage on the screen.

After each transfer I edited the files using the HxD hex editor. With HxD I could see and remove the initial CR/LF echoed by the initial command, then the final batch of text including the response "COPIED :F0:FILE.NAM TO :CO:". In the end, if done right, the file size matches the DIR listing.

Several files were successfully transferred this way and tested for integrity on another MDS including a large BASIC interpreter. It's not an automated process but I think you could transfer several dozen files an hour this way.

Here's a conversation I had with Ken about ISIS, OSIRIS, etc.